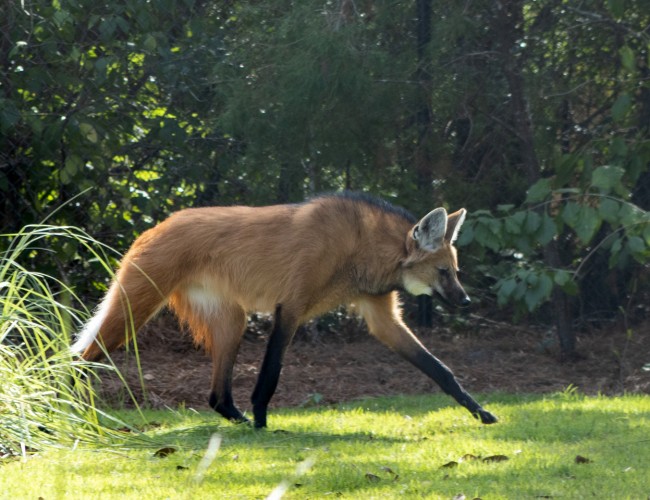 Since arriving in mid-October, the nearly 3-year-old sister and brother pair, born December 2018, are settling into their new home quite well. Guests to the park can now view them in their newly-constructed, custom-designed exhibit.

Maned wolves are the largest canine species in South America, standing close to 3 feet tall at the shoulder and weighing up to 60 pounds. Their markings resemble those of foxes, but they are neither a fox nor a wolf. Instead, genetic studies show that the maned wolf is a distinct species. It is the only species in the genus Chrysocyon, meaning "golden dog." Their impressive red coat, large ears, and stilt-like legs are adaptations for living in central South America's grasslands and scrub forest, from Brazil to the dry shrub forests of Paraguay and northern Argentina.

Gentle and timid, maned wolves are primarily solitary in the wild, although a breeding pair usually remains monogamous and shares the same territory. Maned wolves are listed as near-threatened due to loss of habitat by encroaching human populations, the introduction of certain diseases, and hunting for their body parts believed to have medicinal healing powers.

Gulf Breeze Zoo continues to respond to species decline and is focused on preserving animal populations, including maned wolves. The addition of Stella and Cieza to the Gulf Breeze Zoo allows residents of the Florida Panhandle an opportunity to gain an appreciation for protecting this unique species.